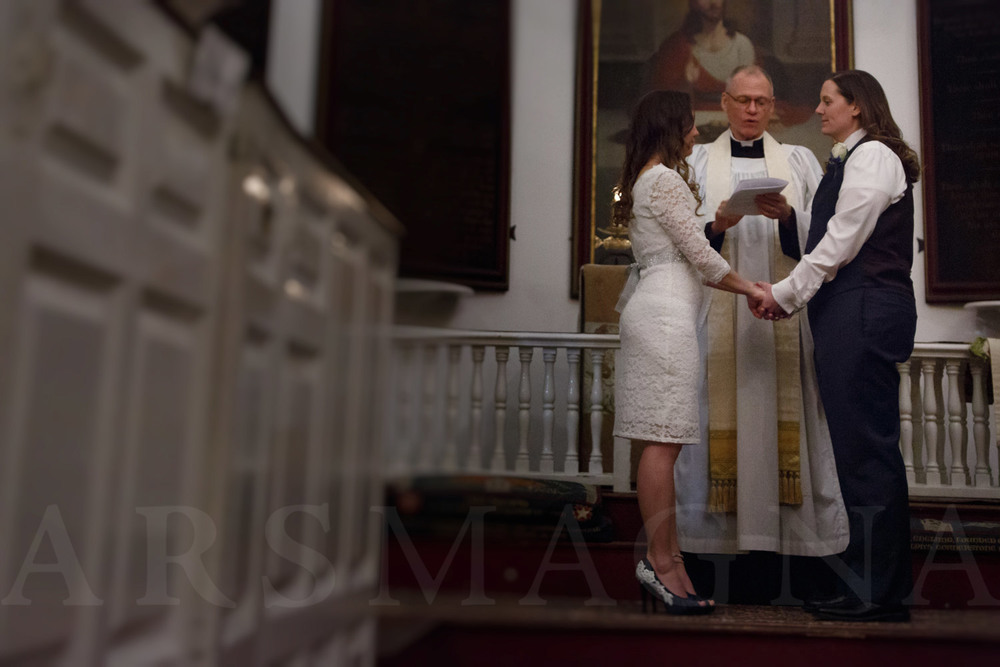 Winter wedding by candlelight.  Old North Church. Friday evening. Followed by dinner at in the North End. A beautifully simple and elegant urban evening. Now that the legal and solemn part is done, Tracey and Michele will have the big party in their home state of Florida.

We previously saw them at their North End engagement session. You will likely note without snow.

Now operated as an open and affirming Episcopal Church, the church itself is rich with history.  Paul Revere apparently used the steeple to light warnings on his famous ride.  This same steeple (well technically, a rebuilt steeple) sounded in a peal of bells proclaiming their wedding.  Tim lit each of the candles one by one, and then snuffed them out, one by one, after the guests had departed for dinner.  There is something loving about this gesture of this labor in a church whose first floor isn’t even wired for electricity.

Michele getting ready in one room, with her mother. Tracey and her mother tucked into another room.  Under his solemn black tunic, I caught a glimpse of the pastor?s cargo pants.  This was a break in the veneer, a moment of perfection.  Under a dignified surface, the comfort and the ease of this evening was palpable. In this and in every moment of the wedding.

Each bride was walked down the aisle by her mother. And symmetrically each bride had a brother who stood witness, signing their names in the registry during the marriage ceremony.  A very small group – the innermost of circles – assembled to ring these women with their blessings and love.

With this most epic of Februarys, we weren’t able to shoot much outdoors. They mustered the heat to pose for a little Ice Light action before they were off to dinner. .

Glad, once again, to be living and photographing wedding in a state that became a pioneer in marriage equality. And heart warmed in knowing that as their wedding in Florida approaches, they are now able to be legally married in their home state, and have their MA marriage recognized there.

Wonderful!! Congratulations to Michele and Tracey.

What a beautiful article . So true and heart warming. Tracey and Michele are surrounded by so much love , it’s a wonderful blessing!